Success Stories: From Failing the NPTE Three Times to Crushing It 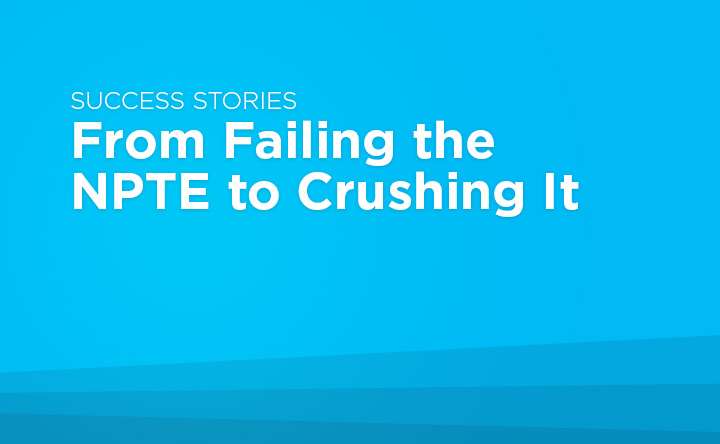 If you spent years studying physical therapy and giving it your all only to have to utter those dreaded words, “I failed the NPTE,” you’re in good company.

Whether you’ve failed the NPTE multiple times, once, or are just afraid of failing, you’re not alone. And good news: Some of the best PTs didn’t pass the NPTE on the first, second, or even third try!

At The PT Hustle, we all know what it’s like to fail the NPTE. After all, it’s what inspired our founder Dr. Kyle Rice (Coach K) to develop an NPTE prep program that has now helped more than 5000 formerly bad test-takers to pass the PT licensure exam.

In March 2021, Coach K sat down with Dr. Krystal Robles via Zoom to talk about how helping her rethink her approach to test-taking led her to success after having failed the NPTE three times.

By age 12, Krystal knew what she wanted to be when she grew up. Having seen firsthand the impact of physical therapy following softball-related injuries, she wanted to be able to make that difference for others.

So she earned bachelor’s and master’s degrees in exercise physiology from Florida Atlantic University, having two boys along the way.

Still, she continued on her journey, entering the PT program at the University of St. Augustine in Miami.

“Because I was older than my peers and had kids, I always felt that little stigma, like the girl with the kids,” Krystal says. “I felt like I had to overperform.”

It wouldn’t be the only stigma she felt on her journey to becoming a physical therapist. Though, overperform she did. Especially during something many of her classmates dreaded … practicals.

“I absolutely adored practicals,” she says. “Everybody thought I was weird.”

While her classmates were sweating over their practicals, Krystal was begging to go first. She loved talking through what she was doing and why, and she was good at it. Clearly, she was destined to be a great PT.

So she took it pretty hard when she found out that she failed the NPTE. Especially because the hospital she was working at had promised her a PT position when she passed.

“When I opened my results, that’s all I could think about,” she says, describing the stigma of feeling like “a loser.”

Despite this setback, Krystal wasn’t about to give up on her dream.

So she found an online NPTE prep course based on a timetable of what to study and when. However, she struggled with that NPTE study review.

“I didn’t enjoy that because the type of studier I am … my favorite thing is not reading.”

Once again, she fell into the trap of self-study — and again failed the NPTE.

“I think that was more emotional than not passing the first attempt,” Krystal says, describing how she “did everything right,” even missing birthdays and family baseball outings to study.

By this point, she was so embarrassed that she completely stopped talking to her friends and former classmates. She knew something had to change.

Not long after, Krystal discovered The PT Hustle podcast, where Coach K posted questions and how to answer them. It never struck her that there was a way to look at questions. It was a revelation. Immediately, she signed up for the NPTE Independent Prep Program and was surprised to find that it was quite different from other programs.

“You literally talked about nutrition,” she says, in addition to mentioning inspirational books and podcasts. “I would have never thought to go down that road.”

And while it helped her get out of the slump she’d found herself in, she failed the NPTE for a third time.

The next time was going to be different.

Despite finding a new NPTE program that resonated with her, Krystal realized there were things she personally had to do differently. First and foremost, she had to ask for help. Attempt #3 was complicated by the COVID-19 pandemic. Unable to leave the house, she found herself cleaning when she should have been studying or playing IT to her two boys as they took classes virtually.

Never one to ask for help, Krystal swallowed her pride and asked her mom — a university administrator who was working from home — to take her kids a few mornings a week so that she could focus on studying.

She also heeded Kyle’s advice to establish a routine and set boundaries, going so far as to make non-PT reading a part of that routine, devoting 6–7 am to reading some of the inspirational books Coach K recommended. She even made meditation part of her routine, despite finding it extremely difficult.

Perhaps most important of all, she sought out a study group via Facebook — something she had been hesitant about after failing the NPTE. Not only did it help her to look at questions differently, she soon realized that people in her group looked toward her for answers.

That was the moment she realized, “I guess I do know what I’m talking about!” It was a huge confidence-booster.

Taking the NPTE for the Fourth (and Final) Time

On the day of the test, Krystal arrived early sporting a completely new attitude … as well as her scrubs.

“I felt so confident about this fourth attempt that I even went in scrubs,” she says, explaining, “This is what my life dream and life goals are. I will be in scrubs for the rest of my life, so guess what? I threw on my scrubs.”

And if that wasn’t a big enough sign of a new Krystal, what happened next surely was.

She got to her computer only to find it was set up for a different user. To make matters worse, it was no easy fix and IT had to be called.

So off she went to the breakroom to wait until it could be fixed. Her nerves started to reappear, but this time was different. She took the time to meditate and pray, and said to herself, “Not today, Satan.”

She completely reframed the dialogue. Whereas she was nervous before, this time she told herself the exam was afraid of her. Instead of letting negative thoughts creep in, she stayed positive.

And guess what? She didn’t just pass the NPTE, she CRUSHED it, increasing her score by 60 points.

Not only that, she again swallowed her pride and reached out to the hospital that had once offered her a job, after initially looking elsewhere out of embarrassment. Right away, she got a reply. They wanted to hire her ASAP.

A Light at the End of the Tunnel

As of interviewing Krystal, she was a week away from her first job as a licensed physical therapist. And after everything she went through, she says she wouldn’t do anything differently because she learned not just about her profession but also about herself.

“There is a light at the end of the tunnel,” she says. “I feel like if I can resonate with at least one person that has failed [the NPTE] in the past, just know that it is possible and it feels really good.”

And she has some tips for success:

You, Too, Can Pass the NPTE

Dr. Krystal Robles’ story is a reminder that achieving our dreams may not be easy, but it is possible when we ask for help. Check out The PT Hustle today and get the help you need to crush the NPTE.