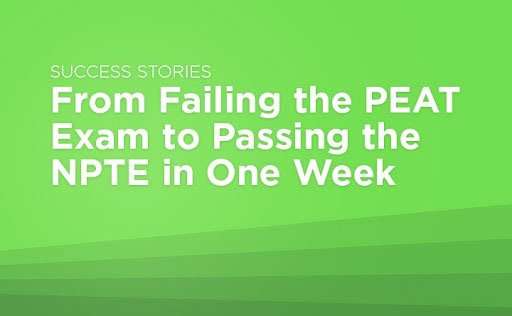 Like so many of us, Mohamed struggled on written exams. Despite never feeling like he was a super “book smart person,” he excelled at what makes a truly great physical therapist — applying his knowledge and skills to practical, hands-on situations.

“I was always stressed at the thought of having to take the NPTE,” says Dr. Mohamed Almubiadin.

Unfortunately, the NPTE review coursework offered by his school program did little to calm his nerves. So he started talking to other PT students and one program kept coming up.

After a 10-minute conversation with Dr. Kyle Rice, or Coach K, Mohamed felt confident that the PT Hustle Coaching Program was what he needed to raise his NPTE practice exam scores and pass the NPTE.

Sure enough, he raised his score from a 55% on the NPTE practice exam to a 100% on the NPTE his very first try! Here are the three tips that helped him prepare for the NPTE and overcome failing the PEAT exam just a week earlier.

Push Out the Negativity

One thing that is essential to your success on any exam, or any challenge in life, is staying positive. And that certainly applied to Mohamed.

Everyone participating in the PT Hustle NPTE Coaching Program takes an NPTE practice exam at the start of the program to determine a baseline score. Doing so gives Coach K a better idea of the help each participant needs.

Still, Mohamed could have chosen to be upset at scoring a 55% on his first attempt at the practice NPTE. Instead, he chose to distract himself from that, reminding himself that he didn’t study for the practice exam because he wanted to know where he stood. Sure enough, his score improved with every practice NPTE exam.

Come time to take the NPTE, he would again channel this positivity when life threw him a curveball. Just one week before the NPTE (and a day before he took the retired PEAT exam), he awoke to a big shock… Someone had hit his parked car while he was sleeping. The car he loved and took so much pride in was totaled.

Easier said than done, though. On he went to take the retired PEAT the next day. He says he rushed through it, didn’t follow the test strategies he and Coach K had discussed, and all-around felt off. And the results reflected as much; he went from seeing a 10% improvement every time he took a practice NPTE to dropping from 640 down to a 591 on the retired PEAT.

But he kept thinking back to a coaching conversation he had with Dr. Rice the week before. It was about how distractions will always arise when there is some major blessing that’s coming.

It’s easy to fall into the trap of thinking that the only way to pass the NPTE is if you study non-stop, day in and day out. And it’s something Mohamed says he probably would have done too, if not for the PT Hustle.

Instead, he chose to study for four to six hours a day, making time to maintain a healthy balance between studying and other aspects of his life. That’s because unlike with many NPTE prep programs, Coach K recommends taking a more holistic approach. He emphasizes that just as important as studying is taking care of yourself, which means eating healthy, taking breaks, resting and getting exercise.

In fact, numerous studies have shown that physical exercise has many benefits not just for your body, but also your mind.

As Mohamed says, “I didn’t want to get up and leave the books, but I knew it was good for my mind.”

The change in attitude paid off almost immediately. From that initial practice NPTE to the second practice exam he took, his score improved 10%. Not only that, it increased every time he took it. That is, until the car incident and the retired PEAT exam, which brings us to Mohamed’s final piece of advice.

Put Your Emotions Aside and Focus on the Task at Hand

Understandably, Mohamed’s performance on the retired PEAT left him unsettled. After showing consecutive improvement with each and every NPTE practice exam, seeing his score drop was disheartening.

Still, he knew that it was the stress of dealing with his car insurance, securing a rental car and a lot of things completely unrelated to his knowledge of PT that threw him off.

He also spent that final week before the NPTE watching various PT Hustle videos, and one in particular stood out to him. In it, Kyle spoke about a cousin who was in the military and what he had said about tense, high-pressure situations and how you have to put your feelings and emotions aside, go in and execute the mission.

As Dr. Rice says, ‘The more emotional you are, the lower your score is going to be, hands down.”

It was the mindsight he needed in that very moment. And he took it to heart. He went in confident in himself, didn’t let the stresses of the previous week bother him and focused completely on what he had to do.

And it paid off. He, and everyone else in his PT Hustle group that took the NPTE on January 26, passed the NPTE!

Crush the NPTE with PT Hustle

Prepping for the NPTE can be stressful, but with the right mindset and support, you can pass the NPTE, even if you failed the PEAT exam.
Find out the PT Hustle’s variety of online NPTE prep courses and other resources can help you prepare today. And check out our blog for other tips and tricks, like the three information retention strategies for studying more effectively.