How to overcome anxiety & pass the NPTE exam in 12 weeks with Dr. Katie Guest 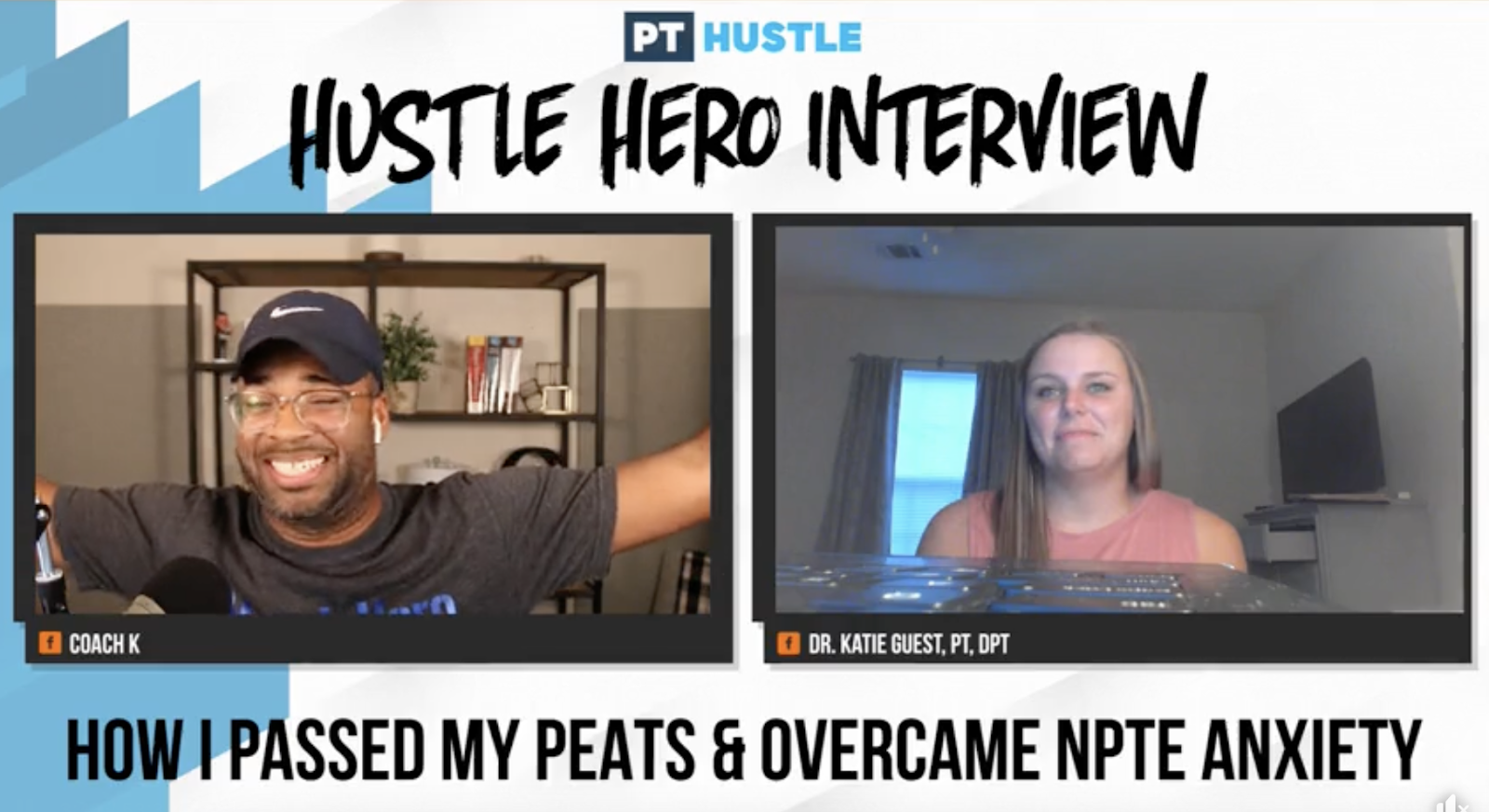 Dr. Katie Guest, DPT, PT, knew she wanted to be a physical therapist long before she ever heard of the NPTE exam. In middle school, her grandfather Papa had a stroke on a family vacation, and she spent a lot of time around physical therapy afterward.

“I got to see how Papa’s PTs helped him get back to a more normal lifestyle,” says Dr. Guest. “The doctors and nurses were involved, but with PTs, we could see the progress that they were making. I knew these were the people who were helping me be able to play basketball with my Papa again.”

In PT school, Katie aced her practicals, never making anything below an A. But tests were a different story.

“If you read my notes on the side, you’d see I had the thought process down,” she says, “but that didn’t always get me to the right answer.”

Her first plan for how to pass the NPTE exam was studying solo. She read the therapy ed book cover to cover, highlighted it, made notecards, and tried to memorize everything she could. Most of the time, her practice tests would improve for a while, and then they’d go down. But looking at the pass rates for the NPTE exam, she felt somewhat confident.

“I had a false sense of security going into the test,” she says. “I saw 93% of people pass the NPTE the first time they take it, and I thought, ‘Okay, I’m not special enough to be in that 7%.’ It affected my studying. I didn’t even pass a practice test before I went into the NPTE! I basically went in blind. I didn’t know anyone who’d failed it, and I figured I’d pass it and move on.”

But, as so many of us know, that’s not the way it goes sometimes.

“After I found out I failed the NPTE, I was unwell to say the least,” says Dr. Guest. “My university had a 100% pass rate, yet we never heard about how to pass the NPTE, or about the people who do fail, despite the fact that failing the NPTE is not that uncommon! We had graduation that weekend, and I didn’t want to go. I was embarrassed, angry, and anxious. I had all these plans, and I was supposed to start a job, and it messed everything up.”

Fortunately, Katie’s family and classmates convinced her to go to graduation. And while it took her a long time to get over the anger and confusion she placed on herself, she already knew her next step.

“I knew instantly I was going to have to take the NPTE again, and I knew I needed to change how I prepared,” she says. “My roommate had a friend who didn’t pass and told me about the PT Hustle.

“I checked out some podcasts and watched YouTube videos and knew immediately: These people get the things I struggle with. After talking with Coach K, I realized my problem wasn’t my knowledge as much as it was my attitude and my anxiety. And that was a place I could start from.”

How to pass the NPTE: 5 game changers from Dr. Katie Guest

As Katie went through the PT Hustle program, she made a few key changes that contributed to her getting the NPTE passed on her second try.

“The first week of my course, Coach K talked about not being focused on the amount of time you’re studying but focusing instead on the material you’re gathering,” says Dr. Guest. “When I switched to studying a topic, it took me two hours instead of four, and I stopped there. Having a plan made a big difference.”

“The first time around, I gave myself 20 hours a week to study, and that was it,” says Dr. Guest. “This time I had to say, ‘I need this time off. During these hours, I need you to not need me because I need me.’ For 12 weeks from April to July, I was selfish—and I didn’t feel bad about it. I had to say, ‘I’m going to do what I need to do because this affects me and my family, and I’ll do everything else later.’”

“One big step I took toward figuring out how to pass the NPTE exam was learning my triggers and setting boundaries—not only in NPTE prep but in life,” says Dr. Guest. “I had people close to me asking: How’s the studying going? What are you doing differently? I could’ve had a great day and someone could ask me that question and it would derail me. I’d think, ‘Is this their way of telling me I’m not doing something right?’ I had to tell them, ‘When you make these comments, I start to doubt myself, and I don’t need to be doing that. Can we just avoid the subject?’ And they understood.”

4. Talking about something else

“I also started talking to my PT friends outside of PT,” says Dr. Guest. “As PTs, we get so excited about our work that we want to talk about it all the time. I made a point to talk to my friends who were already working about things that had nothing to do with how to pass the physical therapy board exam. You need your outlets!”

“Positive affirmations sounded so silly, but they made a huge difference,” says Dr. Guest. “Just thinking: ‘This is my best section,’ or ‘I’ve got this in the bag.’ You feel stupid when you’re doing it, but then you get to the end and you pass the NPTE and you’re like heck yeah! I’ll do those affirmations all day. You gotta be nice to yourself.”

To learn how The PT Hustle can help you pass the PT exam, click here.