How to pass the NPTE exam after failing 3 times with Dr. Sean Trexler 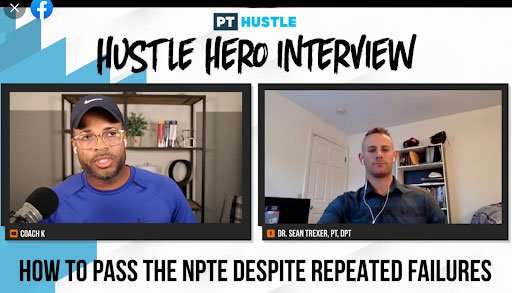 NPTE exam takers: See if this sounds familiar—your PT school recommends an NPTE prep book. You buy it, study it, take practice test after practice test, and drill down on the sections you do poorly on. Then you take the NPTE—and you fail. That’s exactly how Dr. Sean Trexler’s story starts.

“I was scoring around 65%, but I wasn’t confident going into the NPTE like, ‘I’m going to smash this,’” says Dr. Sean Trexler, DPT, PT. “Sure enough, I failed. It was crushing. The second time, I missed it by four points. Seeing that you’re so close and not getting the NPTE passed—it’s devastating.”

As Sean waited three months for the next test date, he heard from a friend after friend who’d passed the NPTE with flying colors.

“Everyone’s out getting jobs and working and I’m just thinking, ‘Man, I really wish I would’ve passed the second time,’” he says. “Then the third time finally comes around, and I fail again. It was just killer blow after killer blow. Coming within four points and not passing on the second time was frustrating, but I was still like, ‘I can do this’. But then failing the NPTE third time—I knew I couldn’t do it on my own. That’s when my classmate Asia recommended the PT Hustle.”

How to pass the NPTE: Q&A with Dr. Sean Trexler and Coach K

Coach K: How do you do with tests in general?

Coach K: What is it about standardized tests that gets you?

Dr. Trexler: I feel like I’m so confined during the tests. And then with COVID, having to wear the mask the whole time, I felt like I was having trouble breathing.

Coach K: After the third test, what did you do to pull yourself out of those killer blows?

Dr. Trexler: I chalked part of it up to COVID. I knew I had to will myself to keep studying and believe I was going to pass, which is easier said than done. Then I found your course and was reinvigorated. I also relied on my girlfriend, family, and friends. They were a great support and kept motivating and pushing me.

Coach K: The people you’re surrounded by are so vital to your NPTE score. To come back from killer blows, you have to put yourself in a team of ride-or-dies.

Coach K: You mentioned being reinvigorated. What changed?

Dr. Trexler: My studying mindset changed so much throughout the PT Hustle program. My whole routine was different. Whether it’s study habits or partners, what you’re doing throughout the day to provide you with more energy, or taking your own mental breaks, the PT Hustle just showed me all these things I wasn’t thinking about on my own.

Coach K: How much were you studying for those first three tests?

Dr. Trexler: At least six hours per day. For the last test—the one where I actually figured out how to pass the NPTE exam—four hours was my average during the week with a rest day on Sunday. I also tried to exercise a little each day, whether that was going for a run or playing softball at night with friends. That was a big difference. Before, each day I felt worn out and exhausted. Now, only doing the four hours per day, I was energized to get back to it the next day.

Coach K: You changed the way you were studying. How?

Dr. Trexler: One huge thing was that the first three times I tried to get the NPTE passed, I didn’t have a group of people I was studying with. In PT school, you study in groups, talk things out, go through stuff. That helps slam home the topic.

Coach K: What was the biggest obstacle you faced heading into the fourth attempt?

Dr. Trexler: Having the right mindset, sticking to my routine and setting a game plan. My whole mindset changed this last time. Before, I was going through the test exhausted, thinking, ‘I can’t believe I still have 200 questions left to go.’ This time, I had tricks up my sleeve. I’d focus on 25 questions at a time, like little quizzes, so it didn’t feel like it was weighing down on me.

Coach K: There’s so much value in looking at the small wins—the little things you can do to raise your score. For Sean, it was all about focusing on, ‘How can I fix this problem?’ Not, ‘I gotta fix all my problems right now.’ Raising your score by one or two questions is a solid, realistic goal.

Coach K: Practice exams go up and down. How did you manage that mentally?

Dr. Trexler: Initially, my practice exams were going up. But when they started to plateau or decrease, I got hesitant. That voice gets back in your head that you’re doing exactly what you were with those other tests, and it’s not going to turn out any different. So I joined a second study group. That helped a lot.

Coach K: That’s a great point: at the end, some of us need more. We don’t necessarily need to leave our group; we may just need to add something extra.

Dr. Trexler: Exactly. That was a big turning point for me.

Coach K: Tell me how the study group helped you.

Dr. Trexler: Toward the very end—2-3 weeks out—I needed the study group where we hit it hard, a couple hours at a time—just going through topics, throwing questions at each other.

Coach K: That’s crucial. A lot of you are doing a DIY study group of one. Not only are you missing out on the opportunity to critique yourself and learn the information better, but you’re missing out on other opportunities because you’re doing it all by yourself. No one’s there to say, ‘Let’s do 30 minutes of questions 3 times a week.’ I’m a lone wolf naturally, so I get the instinct, but we do things better together. At the end, Sean could’ve sat back. But he didn’t. He said, ‘Put me in that group,’ and that changed the game for him.

Coach K: What changed for you inside of the program?

Dr. Trexler: In the PT Hustle, we create these calendars with specific topics each day. It makes it seem like it’s not so much. If you look at it from a broad perspective, you’re picking off a little bit at a time, learning key parts each day, and it doesn’t feel overwhelming.

Coach K: As a coach, I’m always worried about people getting overwhelmed. If you could go back and tell yourself something, what would it be?

Dr. Trexler: Come up with a game plan earlier. Focus on a few topics each day. Don’t try to do it all at once.

Coach K: Tell me about that fourth attempt—the one where you finally figured out how to pass the NPTE.

Dr. Trexler: On the day of the test, I got there at 8:00am. and a worker said, ‘Sorry, you’re going to have to come back in 20 minutes.’ The servers were down. So I go to my car and wait, and 20 minutes later, I’m told the same thing again. There are 15 of us standing there wondering, ‘Are we even going to be able to take it today?’ We were told to sit here and wait or reschedule. So I waited, and I didn’t end up starting the test until 10:30am.

Coach K: So they shifted you into a tired zone and you were still able to pass the NPTE! That’s pretty remarkable.

Coach K: How did you find out you finally got the NPTE passed?

Dr. Trexler: You sent a message that scores were ready early, and I was already out going fishing with my dad, so I asked my girlfriend to check for me. She called and told me I passed. Hearing that, driving down the road with my dad, it was just amazing.

Coach K: So the million-dollar question: Was it all worth it?

Coach K: Amazing. The enemy wants you to believe you’re doing all this for nothing. That you’re not worthy because you failed the NPTE exam once or twice or three times before. I’m here to tell you right now that the students who I coach, who’ve failed the exam multiple times, every single one says it was worth it when they pass, and their life changes forever. Thanks for being here, Sean.