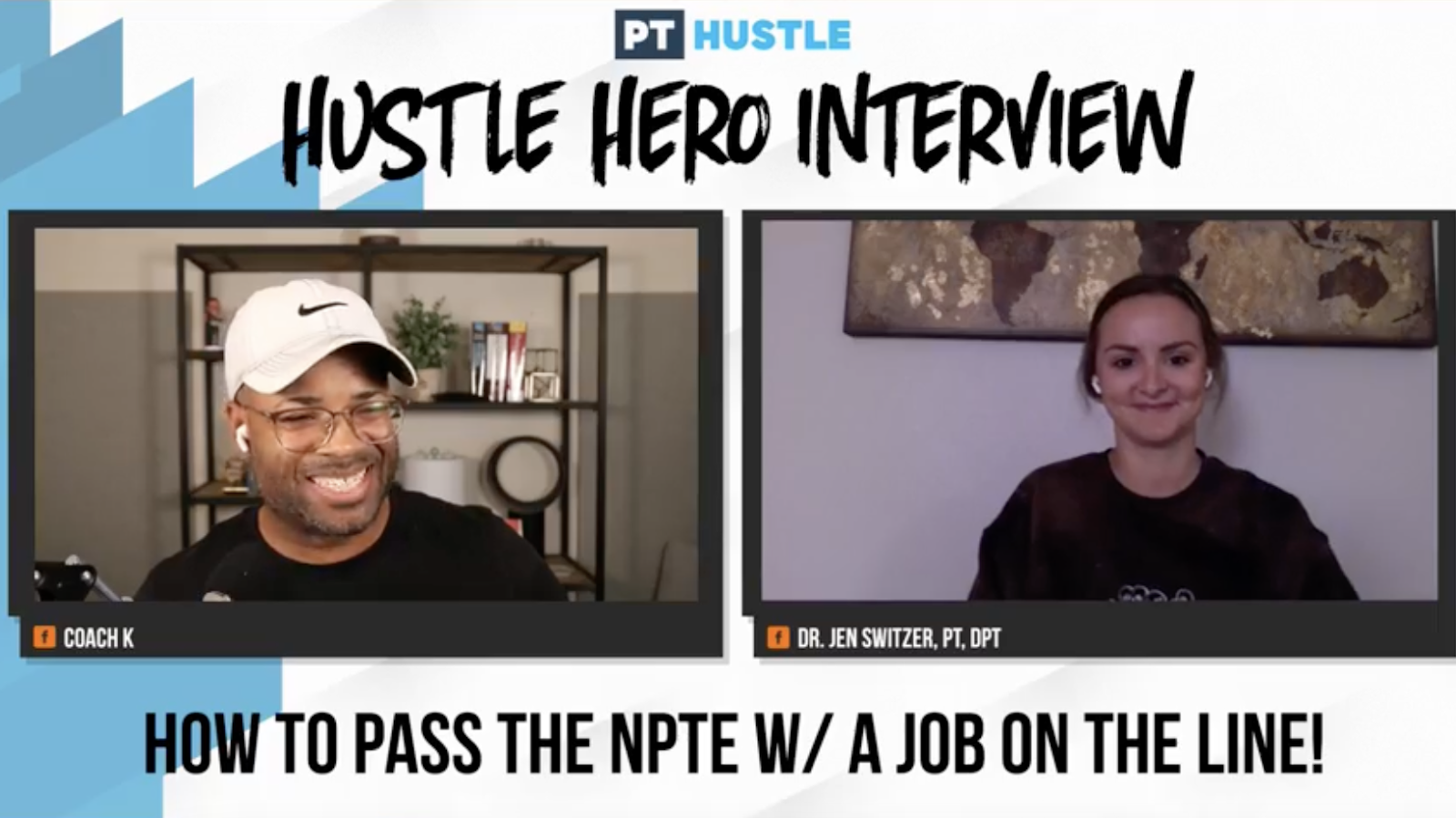 All I have to do is pass the NPTE and I get my dream job.

How many of us have had that thought?

For Dr. Jen Switzer, PT, DPT, it was more than just a thought. During her last clinical rotation, Jen’s instructor was pregnant. She was going out on maternity leave the exact day Jen graduated, and Jen was set to take over her job. All she needed to do was figure out how to pass the NPTE and the dream job was hers.

Taking the NPTE, round 1

“The first time I studied for the NPTE exam, I gave 100%, even while working full time,” says Jen. “I’d take an NPTE practice exam every Saturday and review it on Sunday. I’d study any days I wasn’t working. And on days I did work, I’d come home, shower, make dinner and then sit down at 8:00pm to start studying.”

Suffice it to say, Jen was exhausted. In hindsight, she can see she was really only getting an hour or two of good studying done before she mentally checked out. But this plan of action was the only one she had, so she did her best. And ultimately, she ended up failing the NPTE.

“After I got the results, I was in shock,” she says. “They came out while I was at work, and I had my fiance sign in and send me a thumbs up or thumbs down, which I don’t recommend at all! I opened the fail thing you get and just wanted to burst into tears.”

Jen didn’t want anyone at work to know. She had an evaluation scheduled after lunch, and she just kept refreshing the screen, hoping they had miscounted or that something was wrong.

Jen went as far as contacting the NPTE federation to ask if it was a mistake.

“I was 12 points away from passing, and, of course, now I don’t think they miscounted 12 points!” says Jen, laughing. “But I was in denial. I didn’t know what to do. My boss talked to the hospital and I was able to keep the position, which was good. But it was all just super embarrassing. My coworkers are also my close friends, and to have everybody know that I failed was just overwhelming.”

Taking the NPTE, round 2

The second time around, Jen reached out to Dr. Kyle Rice, aka the PT Hustle’s Coach K. She asked about setting up a phone interview, but when the time came to pull the trigger, she felt embarrassed about asking for help.

“You totally ghosted me!” says Coach K, laughing. “But I don’t hold it against you.”

“I know! I just didn’t respond,” Jen says now, shaking her head in disbelief. “The second time around, I super overcompensated by having no life. I ate, drank, and slept the NPTE. I didn’t go get groceries or watch a movie or go for a walk. I read the review book my school gave me front to back—all 900 pages—and I studied 65 pages at a time.”

Sadly, that approach didn’t work either. After failing the NPTE a second time, Jen was ready to make a change. She had just missed out on another ideal position, and she knew the truth: She simply didn’t know how to pass the physical therapy board exam on her own.

Taking the NPTE, round 3

“I knew the PT Hustle was an investment financially, which was tough to think about after losing another full-time position,” says Jen. “But breaking it down, I saw what the program would cost was one or two paychecks from these amazing positions I was losing because I wasn’t passing. And I knew it was time.”

Once Jen got into the PT Hustle, she asked a friend who’d done the program what to do.

“My friend said: Commit fully. Don’t screw around. Don’t miss days. Do exactly what Kyle says,” Jen remembers. “I cut down on studying. I exercised more. I took more time for me.”

For Jen, learning test-taking strategies and how to build confidence was crucial. After failing the NPTE twice, figuring out how to truly believe she could get the NPTE passed was her biggest challenge.

“I realized that the first few times I took the NPTE exam, I was bitter,” she says. “I blamed the test for holding me back from my life. But Kyle helped me see: The NPTE is not trying to make you confused. They’re not trying to trip you up. That hit me really hard.”

While in the PT Hustle program, Jen started to feel differently about the test. She had a new mindset and started to approach questions in a different way. And—the third time—she passed the NPTE.

“When I walked out of the test, I burst into tears,” says Jen. “My fiance was like, ‘Oh no, you failed again?’ And I was like, ‘I don’t really know why I’m crying!’ It was hard, it’s always hard. I just had so many emotions. But I knew somehow that I was done with it.”

After passing the NPTE, Dr. Jen Switzer took a well earned vacation to Florida. Then, she returned to a job—at the same hospital where everything had originally fallen through.

“If you told me, after the second attempt where I lost the job, that I would eventually end up at the same hospital, I would’ve never believed you!” says Dr. Switzer. “But everything works out like it’s supposed to.”

3 keys to passing the NPTE from Dr. Jen Switzer

1. You don’t have to study everything.

Dr. Switzer: You’re going to see some things on the NPTE that you didn’t study, and that’s okay. Learning what my strengths and weaknesses were and really honing in on those weaknesses was tough for me, especially as someone who studies so much and reads the book front to back. But once I started to see the results in my NPTE practice exams, I was like, ‘Okay, this is working. I’m doing what I’m supposed to.’

Dr. Switzer: When I finally figured out how to pass the NPTE, I was sticking to a schedule. Every day, I studied two to three hours. I checked off hours for certain topics, and then I gave myself the rest of the day to see friends or family or do yoga or watch Friends. I didn’t let the test consume me. I did what I had on the schedule that day, and when I was done, I was done.

It’s so important to listen to your body. If I needed to sleep in and study later, I did it. Coach K and I started calling this ‘intuitive studying.’ Listen to your body, check in with how you feel, and give yourself a break when you need to. That way, you’re studying during the times where you actually have the energy to study.

3. Find people who can help you find confidence in yourself.

Dr. Switzer: When you’ve failed the NPTE more than once, talking yourself into staying confident is tough. This time, if I didn’t do great on a PEAT exam and I was really freaking out, I knew where to go.

On Facebook, Kyle was always there to respond. In my study group, we talked to each other throughout the process, celebrating successes and talking through failures. Having a couple other people in the same situation is huge because not everyone around you understands the heaviness of failing. It’s a lot to handle, and you don’t have to do it alone.

“A lot of you are stressed out right now because you’re not sure if this is going to work out for you,” says Coach K. “You think that if this doesn’t work out, you’re not going to be able to do what you’re supposed to do.

“But Dr. Jen Switzer is proof that what is for you won’t pass you. What you’re supposed to have will be for you. Jen didn’t pass the NPTE once. Then she didn’t pass it twice. Then, on her third attempt, the position she always wanted is back there waiting for her. You just gotta believe.”

Find out how the PT Hustle can help.