The 3 Pillars of Passing the NPTE Exam 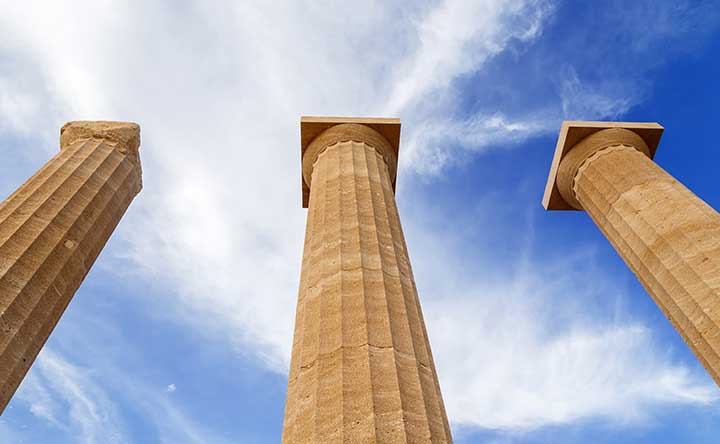 If you’ve ever felt the sting of scoring poorly on standardized tests, you know it can feel like you’ll never do better. Dr. Kyle Rice did. Before passing the NPTE exam with a perfect 800, he had consistently tested among the bottom 10% of test takers on every standardized exam he’d taken.

So what changed for Coach K?

Knowing he had to pass the National Physical Therapy Examination to become licensed as a PT, he set out to study how standardized tests work. In the process, he discovered three key pillars for how to pass the NPTE in one shot. And, for that matter, any standardized exam.

Today, we’ll be discussing how to pass the physical therapy board exam using the same pillared approach Coach K has used to help more than 5,000 PT grads pass the NPTE since 2013.

1. Have a Strategy for Identifying NPTE Weaknesses

Something you’re going to notice about this and each of the three pillars for passing the NPTE is that they sound pretty obvious. How we go about each, though, is where the PT Hustle method differs from a lot of what the NPTE “gurus” are saying.

If you’ve done much research into what other NPTE test-taking experts are saying, you’ll know most of them say to take practice exams as much as possible. Then to look at what areas you scored the lowest on and focus your efforts there. For example, if you score lowest on musculoskeletal, you’ll focus there. The problem with this approach is that, come the next practice exam, you improve on the musculoskeletal questions but score lower on neuro.

It’s what Coach K refers to as “the hamster wheel.” Because you’re not gaining any traction.

A better NPTE test prep strategy is to not just look back at what you scored the lowest in, or at the specific rationale behind why you missed one particular question, but to all the questions you missed and why you missed them. By categorizing your key mistakes, you can start to identify why you’re missing them in the first place.

This approach is why Dr. Rice recommends taking practice exams every two or two-and-a-half weeks rather than as often as possible. Otherwise, you’re just in a constant cycle of studying for exams rather than working on addressing the NPTE test-taking weaknesses you’ve identified.

Learning to identify weaknesses quickly is also a core component of the PT Hustle methodology, and key to the other two pillars of NPTE test prep.

NPTE test prep pro tip: Use an Excel spreadsheet or Google Sheets to categorize the types of questions you’re missing and why. It’s very likely that you’re missing certain questions because you’re thinking about them the wrong way; not because you don’t know the content.

2. Have a Planning Strategy for How to Pass the NPTE

Ok, so you’ve seen the generic NPTE study time tables out there. You may have even used some of them. It can seem really helpful to have a schedule of topics you should be studying and when.

There are a lot of problems with that approach, though. We don’t all need to focus the same amount of effort on each area. Nor does every topic require an equal amount of focus. But worse, consider what happens when you fall behind.

“You wind up feeling incompetent, like you’re not good enough, and then you burn out,” says Dr. Rice.

So how does the PT Hustle approach to NPTE prep differ?

Next, Kyle says to create a calendar based on your NPTE weaknesses and attack those first. He also recommends studying only about four hours a day.

“The gurus are saying, ‘Load up your calendar with all my generic stuff, and don’t stop until you finish; your day is finished when you finish all your topics.’ We say, first of all, take care of yourself.”

Why? Because if you’re specific in your approach, you won’t have to study as long because you’re focusing on things that are getting you points as quickly as possible. To continue the analogy of the map, if you’re looking at the whole country, you’re focusing on too much that has no relevance.

3. Have a Strategy to Raise Your Score on the NPTE

Finally, if you want to absolutely crush the NPTE with complete confidence, you need a strategy to raise your score on a daily basis. And that strategy is not just “study more.”

Too often, experts in the test prep world equate not passing the NPTE to not studying enough, and that couldn’t be further from the truth. As a self-proclaimed former terrible test taker, Coach K recalls how hard he would study compared to those around him. In fact, the majority of PT students and grads he works with share similar stories.

In the PT Hustle, first we focus on what we call low-hanging fruit. These are the easiest things to fix that are going to get you the most points back.

Another common issue students and grads have is that they feel like they know the material but struggle with what the questions are truly asking. So we focus on developing a system for interpreting questions so that you get reproducible results.

Still, other test takers see their scores decrease over the course of the test. So we work on strategies for improving their endurance.

All this is to say, there is no one strategy to raise your score. By focusing on the issues you’ve identified and working to address two each week, you will be able to crush the NPTE and land your dream job!

You Can Pass the NPTE

Keep in mind that each of these pillars relies on the others, so it’s important to focus on all three. And of course, all of us at The PT Hustle are here to help you absolutely crush the NPTE!